An amazing paradox: many of the largest modern bookmakers around the world were founded in Russia, and began to actively scale up to the whole world after they faced problems in their homeland. The same can be said about 1xbet - a large player that has long been no longer perceived as a purely Russian one.

In the middle of the first decade of this century, a legislative vacuum reigned in Russia in the field of betting - bookmakers were born here in large numbers since the principles of their taxation were spelled out rather vaguely. In a period of such uncertainty, 1xbet was born, which the owners prudently registered in offshore Cyprus. Later, the Cypriot registration may have saved the office from disappearing, because as the Russian tax authorities tightened the screws, the company managed to try on the status of illegal in its native country.

Since targeting was initially set not only to the Russian but also to the entire post-Soviet market, 1xbet initially positioned itself as a multilingual site with the ability to open wallets in various currencies. This, again, helped the company survive blockages in various countries - while one market sagged, the rest kept the business afloat. As a result, even now, a rather strange situation is developing: in fact, 1xbet is present in more than a hundred countries, offering as many as 62 language versions, but at the same time in many jurisdictions, its activity is regarded as illegal and is even subject to blocking by government authorities. Among other things, this office does not have legal status in the UK, although until 2019 it was present in this market and even sponsored Chelsea and Liverpool.

All this, however, does not prevent the company from generating revenues of about $ 2 billion annually. She uses the money she earns, among other things, on rather aggressive advertising involving first-rate stars. Among the official partners of 1xbet in recent years were the Italian Serie A and personally Andrea Pirlo, Catalan Barcelona, and CAF, and this is only in football. 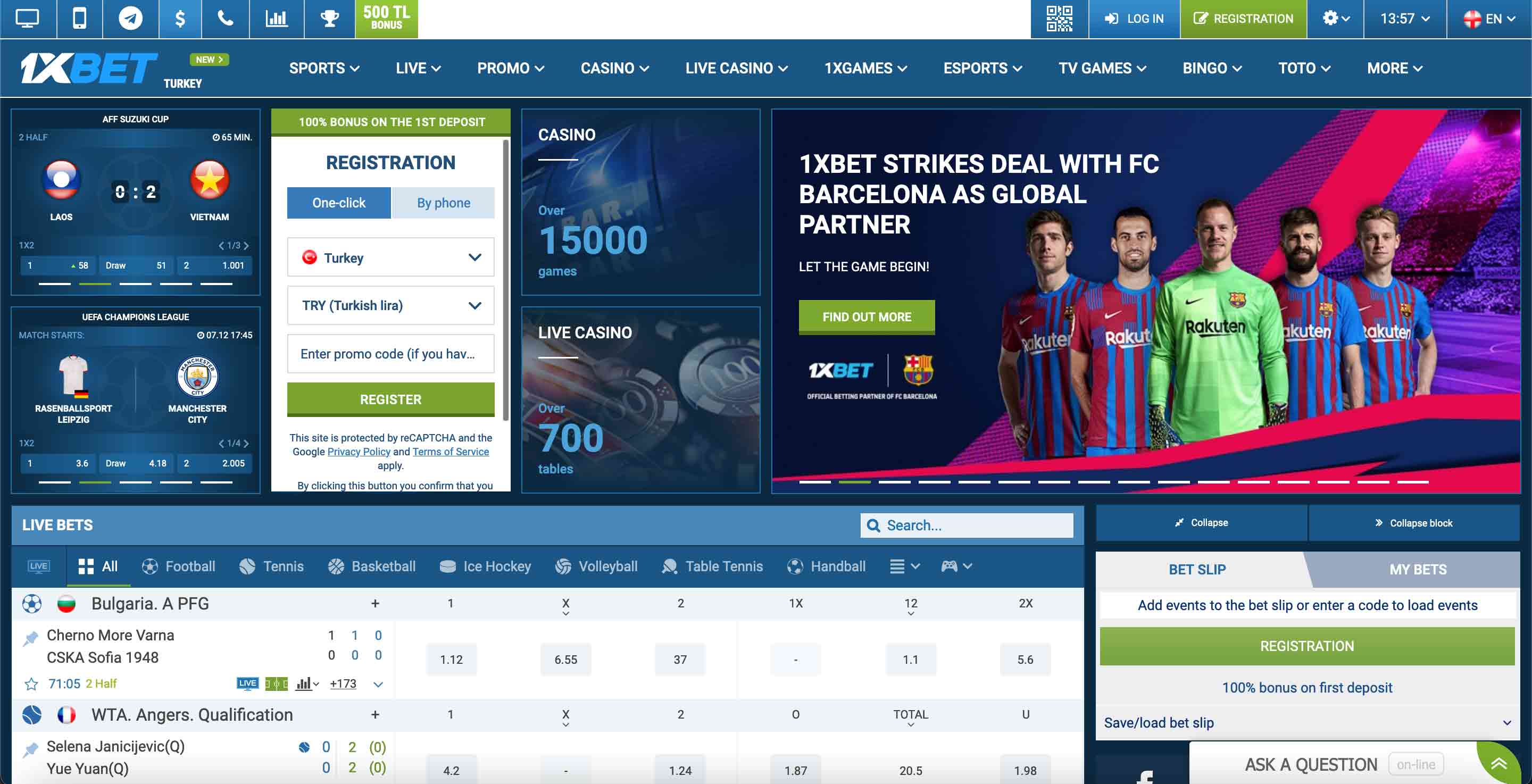 How to register at 1xbet?

For UK users, 1xbet login is complicated by the fact that the office does not officially operate in the UK. The choice of a potential new client is offered certain types of registration in the actual bookmaker part of the site and the online casino, and four ways - in one click, by phone number, by e-mail, or via social networks. However, in all cases, the user will not be able to specify their country as the UK or register an account with a UK phone number. The named options are simply not in the drop-down lists opposite the corresponding field in the questionnaires

Therefore, registration by phone number in 1xbet is not suitable for British users a priori. The same story, in general, is relevant for registration through social networks - there are five options to choose from, but from the proposed only Telegram is at least a little bit wider in the UK, while other sites are in demand only in Eastern Europe. Registration by e-mail involves filling out a solid questionnaire, where, among other things, they ask for a phone number. Therefore, all this is not good, and it remains to register with only one click.

In fact, one-click registration at 1xbet also requires you to specify your country of residence and select your national currency, although neither the UK nor the pound sterling will be among the options. There are two options: either you have second citizenship (or resident status in another country), and you honestly indicate this, or it remains to choose the first available country from among the allowed ones and randomly choose the account currency. The second option will seem impossible to law-abiding UK citizens who are accustomed to strict regulation of betting, but the 1xbet administration does not harshly find fault with this, and will hardly require verification.

If you still live in the UK and register with one click, you will have problems accessing the 1xbet bonuses. You are unlikely to be able to link your phone to your account, but a fully completed application form is a prerequisite for participating in the bonus program. It's another matter if you registered as a non-British, and not at random, but because you can actually provide your overseas address and provide a foreign phone number. However, be prepared that as a result of attempts to receive a welcome bonus, the administration will still ask you to go through a full-fledged remote verification.

Then, at the time of registration, you can receive your first welcome bonus. Please note that 1xbet has both registration and bonus program separate for the bookmaker and online casino. If you are interested in betting, then the 1xbet bonus will be a doubling of the first deposit by an amount not exceeding 100 euros. The money will go to a separate, bonus account, and it will not be possible to withdraw it from there until the user fulfills the wagering requirements.

Wagering assumes that you need to put down the amount of remuneration in five times the amount - only then what remains of it will go to the main account. As per the wagering rules, 1xbet does not count any bets, but only express bets consisting of at least three events. Please note that each of these events must have a coefficient of at least 1.4. It is necessary to fulfill the wagering requirements within 30 days from the moment the remuneration was accrued, otherwise, it will irrevocably burn out.

You can find out about other draws and promotions from 1xbet in the "Promo" section of the bookmaker's website.

Nowadays, a huge part of the traffic of bookmakers is generated using mobile devices - bettors do not want to be tied to a home PC, because they are usually quite active people. Realizing this, 1xbet is keenly interested in providing its customers with the opportunity to place bets directly from their smartphone, at any free moment. The screenshot below clearly shows what the display of the main page looks like on the screen of a mobile phone - the controls are conveniently displaced in the corners, everything fits neatly on the relatively small display of the portable device. In this form, the site opens directly in the browser - that is, additional software is not required.

But attentive readers probably noticed a pop-up window at the bottom of the screenshot, suggesting installing the 1xbet mobile application on this device. It is generally accepted that the program, although it takes up space in the phone's memory, consumes less Internet and generally works faster, although we did not notice a fundamental difference between them during operation. The software for Android is downloaded directly from the bookmaker's website, and to download the iOS application, you go to the AppStore website. You can also schedule the download of the installation package to your phone using a connected PC - for this, in the site header, click on the smartphone symbol and select which application you need.

Both the mobile version of the site and the 1xbet application allow customers to fully use all the functions of the bookmaker's office. A betting account is common for a PC and a phone, you can replenish it from a smartphone, place bets on it, and use it to withdraw the won funds.

Striving to be present all over the world, 1xbet offers its customers almost fifty deposit and withdrawal options. To see all of them, click on the dollar sign in the header of the full-screen version of the site, or find the corresponding section in the menu of the mobile version. The developers, by the way, have provided a convenient filter that allows you to sort out suitable payment directions for a specific country, and among them, there is even the UK, from which users are allegedly not accepted.

The options for depositing and withdrawing funds from 1xbet in the UK are as follows:

It is noteworthy that each of the directions is designed in the form of an informative card that allows you to immediately get more detailed information about the features of the payment. First of all, the 1xbet user sees the minimum limit for this direction - in most cases, it is 1 euro for a deposit and 1.5 euros for a withdrawal. Below you will find information about the commission - it is usually not charged either when making a deposit or when withdrawing money. Even below, there is information about the speed of the transaction - deposits usually occur almost instantly, while withdrawals, depending on the chosen method, theoretically can take even several days.

How to recover a forgotten 1xbet login?

If the password is recovered quite easily, through the "Forgot password" form with is sending by e-mail or SMS, then it is a little more difficult to recover the login. To get started, contact 1xbet support by writing to info1xbet@1xbet.com. To make sure that your account is not passed on to scammers, operators will ask a few questions about the time of account registration and the first (or last at the moment) account replenishment, the last rates, and so on. Deal with the answers - get your login. Potentially the most difficult question is about the game account number, so you should write it IMMEDIATELY AFTER REGISTRATION.

Why is the Android application downloaded from the 1xbet website not being installed?

Android phones do not recognize any programs by default if they are not downloaded from Google Play. However, there is an option in the system settings that allows the installation of applications from unknown sources. Use it and try to re-launch the downloaded file 1xbet - this time it should work.

1xbet writes that the match I bet on has been canceled - what does this mean?

It happens that, due to force majeure reasons, it is not possible to finish the match on time - the reason may be, for example, weather disasters, riots, a fight on the field, the same coronavirus (then the match will not start). If the game has not continued within 24 hours, 1xbet considers the match to be invalid and returns the money to the player. The funds will be credited within 24 hours.

What is 1xbet coupon insurance?

Coupon insurance is a paid service that allows you to lose not the entire amount of the bet in the event of a loss. In fact, 1xbet offers, by paying extra, a little to reduce the coefficient of the event, but at the same time not to lose all the funds if the expected event does not happen.

Since 1xbet does not need any introduction at all, there are a lot of reviews about it on thematic forums on the Internet. This is very useful in a situation where you want to get an objective, unbiased opinion about the bookmaker. This is exactly what we needed, so we studied hundreds of comments on the net. It turned out that 1xbet has the following advantages:

As for the criticism of 1xbet, it also exists, and we do not plan to hide it. Another thing is that it sometimes looks illogical - you can find a lot of reviews about the scam from the bookmaker, but why does it then remain so popular, and is it worth trusting such messages? In addition, some users believe that the 1xbet customer service is slower than the competition, and the bonuses are lower. In our opinion, all this is somewhat exaggerated, you yourself decide whether this is so or not.